In the beginning, the plan was to prepare the horoscope of a person about whom all I knew was that they were one of the four winners of the 2015 Prix Meret Oppenheim / Swiss Grand Award for Art. I have often accepted similar commissions in recent years, so, relying on the provided data — birthday, location and time, I began to undertake an analysis of the character of the person. As the entire project was fairly advanced, my resourceful assistant, a conscientious Capricorn, came across the name of the prize recipient. This ultimately had little effect on my reading, as I did not personally know him. The birth horoscope of Christoph Büchel very clearly indicates success and fame for this unusual Virgo, born in Basel at 2 : 15 pm on the 11th of September 1966 with Sagittarius in the ascendent. The stars show a first clue of contradiction, of two souls conjoined in the breast of this artist. The typical Virgo qualities of this Earth sign — modesty, reticence, reason, skepticism, a tendency to analytical thought, a love of order and a sense for detail — stand in direct opposition to the characteristics of the Fire sign Sagittarius — generous recklessness, a love of travel and new horizons, a pronounced feeling for philosophical thought and a tendency for synthetic thinking. We have here a strong and ambivalent character who — not without difficulties — must reconcile the contradictions between the extroversion and the ambition of Sagittarius and the modest reticence of Virgo. Four planets in Virgo and in the sector of ideas — in particular Uranus the rebel — indicate the importance of ideas and analysis. A resultant tendency for novelty, for innovation, and an exceptionally original creative streak could express itself in architecture or sculpture, amongst other activities. The second power-planet in this quartet is Pluto, that here symbolises a talent for manipulation and a certain lust for power, but also the willpower to reform, to explore new paths, and to find new methods. Add to this the facility for clear concepts and language, as well as the capacity to be as comfortable in the abstract as the concrete. Both stars have in any case something in common : a love of independence … The Sagittarius ascendent is a symbol for eternal youth, the puer aeternus (or eternal boy). Often people with this Sagittarius-Virgo mixture look young even as they advance in years, as in the case of Michael Jackson, Prince, or Gérard Philippe. Frequently, these people are mischievous and provocative, but have a sense of humour, and sometimes a playful nature. They enjoy upsetting the applecart of tradition and reject the establishment. They embody that old saw on the topic of marriage : “who ever is in, wants to get out again, and
whoever is out, would like to get in”. All in all, he’s a loner. 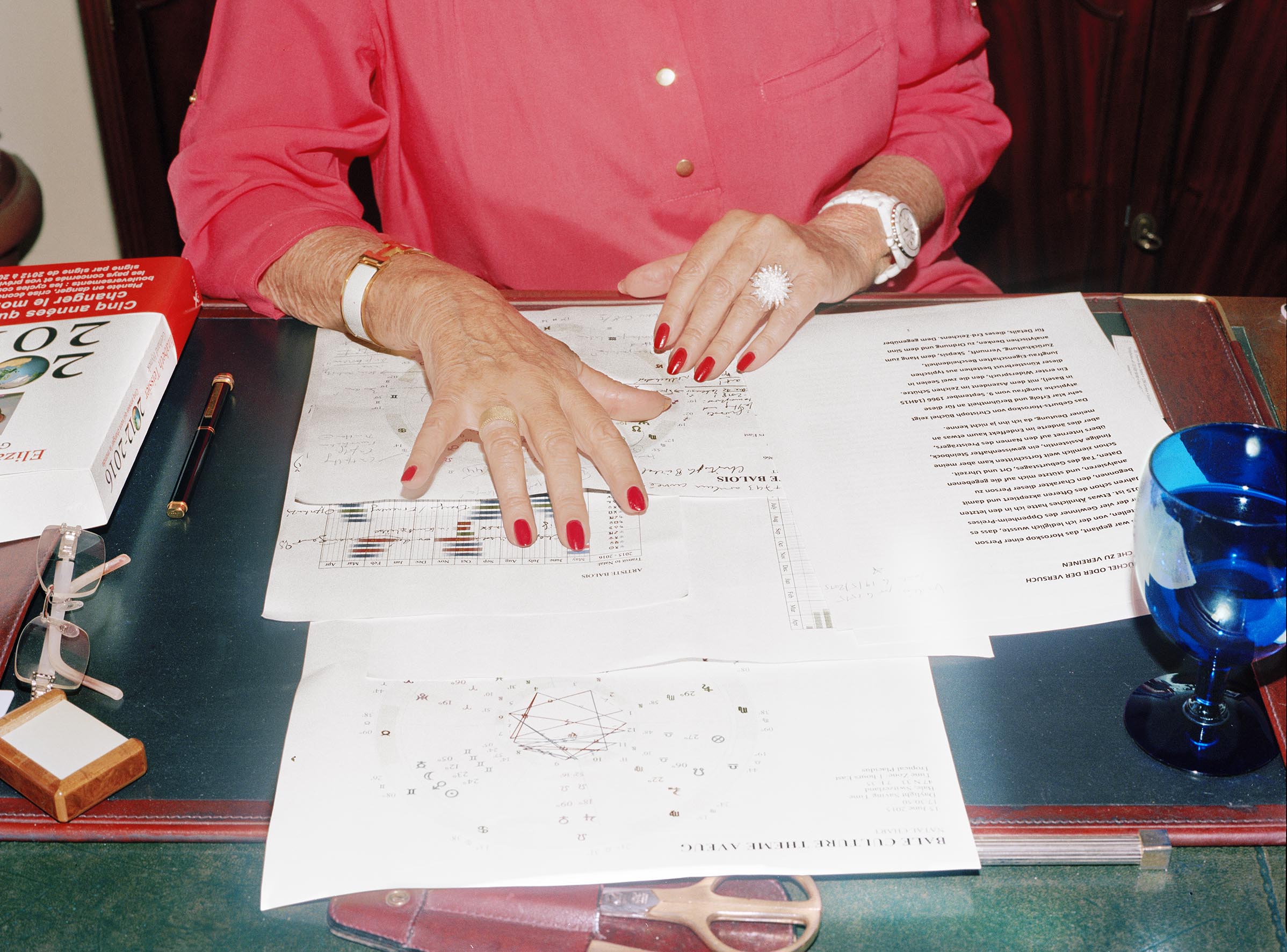 These are just a few indicators of psychological schism. In addition, Mars displays a superposition with the moon in Leo, which manifests itself in a pronounced feeling for aesthetics and a need to shine, even at the cost of others or of the social order. Unsurprisingly, at the time of his birth in Basel the midheaven — or, so to speak, the zenith, the symbol of vocation — stood in Libra, which usually indicates the fine arts. As the Libra planet, Venus, stands in the sector of crises, it is also no surprise he always questions everything … Luckily for Christoph Büchel the presence of this Venus has a very positive influence on friends and projects, and friends will play a major role in the success of this artist. A further important aspect (without boring you too much with technical details ; we are speaking of Lilith) signals that he is rather unsociable, and that communication could prove to be problematic. This could be triggered by conflict with his father. Also, his relationship with his mother was neither simple nor harmonious — heated arguments and a degree of aggression are not uncommon with this constellation. The moon in the star of
Leo indicates a strong maternal personality, whose high expectations and domineering character influenced his picture of women, and perhaps also his sexuality. The moon in Leo, combined with the stimulation of Mars, furthermore explains his strongly pronounced sense of aesthetics and provocative personality, and his high self-regard, that in particular phases of his life could lead (almost ?) to megalomania, which is in stark opposition to the modest Virgo’s tendency to underestimate themselves. One more point : my hypothesis is that our artist has inherited his artistic talent from a previous life. This is his Karma.

Summary
A multi-facetted personality, torn through opposed tendencies that have formed him into a free spirit and a free thinker who wants to reconcile extreme contradictions and transcend himself ; not only through abstractions, but also through the search for universality … Is it even possible, that his greater goal is a universal world peace, la paix universelle ? Altruism and spirituality might balance his inner tensions, and give his life real meaning.

Future Prospects
As an astrologer, I am not surprised that in the case of Christoph Büchel the signs of the times are pointing to success. Noteworthy public recognition seems likely, taking into account the positive influence of Jupiter, effective since October. Between May 2015 and March 2016,a major change (moving home ?) could enter his plans, and things might become pretty hectic now and again. Furthermore, Saturn could impose limits up until October, or frustration for his emotions ; he will have to get to the bottom of things (such as relationships). At the same time, through Uranus, totally unexpected opportunities will open up (from now up until April 2016), and particular highlights both in artistic production and in relationships can be expected in September 2015. An important stage in his life ! At the moment the planet of luck, Jupiter, signals success. From around the 9th of June through to the middle of June, Christoph Büchel will be confronted with an important choice that will bring both artistic and personal consequences, with complications to be expected around the 21st of June. From November 2015 begins a phase of happiness, perhaps connected with travel or foreign lands, that promises positive results in March 2016. In February 2016 Büchel stands again in the limelight and will make a big leap forward, and in July 2016 he will reap what he’s sowed. In the early year and up until 2018, a positive Pluto will lead to a transformation, with a radical new beginning and an unexpected development. All in all, we currently see a degree of influence flowing from the stars that is virtually a once-off event in a lifetime…
Good luck to Christoph Büchel !
Dr. Elizabeth Teissier

Dr. Elizabeth Teissier
The Swiss astrologer, born to a French-speaking mother and Swiss-German father, is known for her television appearances and for over 40 books translated into a dozen languages. Dr. Tessier is the first western astrologer to be translated into Chinese. Elizabeth Teissier’s doctorate in sociology in 2001 at the Sorbonne in Paris created headlines in the international press from Le Monde to the New York Times, the latter published an article with the headline “Starwars in the Sorbonne”. Alongside many
horoscope columns, including the Schweizer Illustrierte, Dr. E. T. publishes horoscopes, predictions and blogs on political events on her successful website every week. For 30 years she has advised leading political figures, including François Mitterand († 1996) and King Juan Carlos of Spain, as well as large firms. Elizabeth Teissier lives and works in Geneva.

This article is available in the publication Prix Meret Oppenheim 2015 in German (p. 50-53) and English.